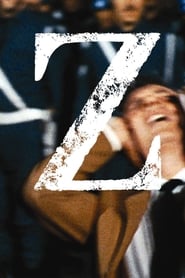 Repression is the rule of the day in this film that skewers Greek governance of the 1960s. Z, a leftist rabble rouser, is killed in what appears to be a traffic accident. But given the political climate, the death of such a prominent activist raises troubling questions. Though it’s too late to save Z’s life, a postmortem examination suggests that the ruling party was behind his death. As the facts leak out, those who tell the truth pay the price for their honesty.

Nowadays it is very rare to see movies that can really come in handy in real life, so Z has become a truly valuable find for me.

He told me about this movie back in 1969, but I managed to watch the movie only now, of course, it is plotting, it is difficult to restrain emotions while watching.

The main theme of the movie is not new for Drama, History, Thriller, but the director managed to reveal it quite realistically, plus the characters are not made of cardboard, you want to analyze their actions.

Throughout the 127 minutes, I had the feeling that not today, but tomorrow, I will definitely meet them in the nearest supermarket or park.

Despite the dryish script in places, Costa-Gavras created a good movie: the atmosphere is perfectly conveyed, everything in the frame looks natural, each actor is in his place.

The movie keeps tight grip on until the final credits, despite the fact that François Périer, Irene Papas, Jacques Perrin, Jean-Louis Trintignant, Magali Noël, Yves Montand performed their roles rather weakly, probably Stanislavsky himself would have told them: `I don’t believe`.