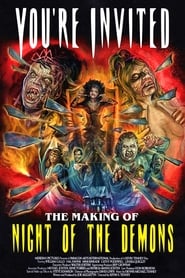 You’re Invited: The Making of Night of the Demons GoMovies

Retrospective documentary on the making of the low-budget horror cult favorite Night of the Demons (1988).

You\'re Invited: The Making of Night of the Demons GoMovies Review

I liked the movie You\'re Invited: The Making of Night of the Demons, thanks to the boring dialogue between the characters and the really intriguing moment of their interaction with each other, 72 min minutes of time were well spent.

After finishing watching this movie, I came to the conclusion that for the broadcasting of movies in the genre of Documentary, Horror, some storylines do not fit at all in the period of time that is allotted to them, and simply require some kind of continuation and development.

set the movie at a frantic pace, all 72 min minutes, from start to finish, the action does not let go, while it goes harmoniously, without sudden jumps and plot failures.

The movie keeps tight grip on until the final credits, despite the fact that Allison Barron, Billy Gallo, Creed Bratton, Lance Fenton, Linnea Quigley performed their roles rather weakly, probably Stanislavsky himself would have told them: `I don’t believe`.