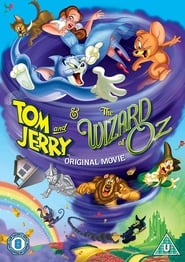 Tom and Jerry and The Wizard of Oz GoMovies

They’re off to see the Wizard, the wonderful Wizard of Oz! Tom and Jerry soar over the rainbow and travel down the yellow brick road in this all-animated retelling of the classic tale. You’ll see your favorite characters: Dorothy, Toto, the Scarecrow, the Tin Man, the Lion, the Wicked Witch of the West, the Wizard, the Munchkins and more. You’ll hear many of your favorite songs, including ”Over The Rainbow”. And you’ll laugh at the antics of your favorite cat and mouse as they get twisted up in a twister, go paw-to-paw against flying monkeys and storm the Wicked Witch’s castle in a heroic attempt to get Dorothy and Toto (and themselves) safely back to Kansas. After all, there’s no place like home.

Tom and Jerry and The Wizard of Oz GoMovies Review

The movie Tom and Jerry and The Wizard of Oz is a vivid confirmation of the fact that `it is not so important what you tell, it is important how you do it`.

This movie became the most memorable of those that I watched in 2011, because the ending, in my opinion, although correct, but at the same time very unexpected, at least it will not leave anyone indifferent.

The main theme of the movie is not new for Animation, Comedy, Family, but the director managed to reveal it quite realistically, plus the characters are not made of cardboard, you want to analyze their actions.

In this movie, the concepts of `good` and `evil` are well intertwined, 59 min minutes fly by unnoticed, but after watching, there is a feeling of some kind of understatement.

You fall in love with this movie from the first scene, Tony Cervone thought through everything to the smallest detail: a cool acting game and a plot, in which, in addition to drive, there is also depth, they catch to the depths of the soul.

Creed Bratton, Frances Conroy, Grey DeLisle, Joe Alaskey, Laraine Newman, Rob Paulsen, Stephen Root perform their roles in such a way that the acting itself is not visible, it seems that you are watching ordinary people who just live their lives.

Trailer: Tom and Jerry and The Wizard of Oz