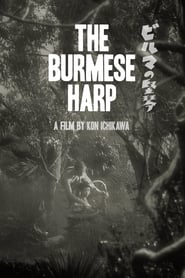 In the War’s closing days, when a conscience-driven Japanese soldier fails to get his countrymen to surrender to overwhelming force, he adopts the lifestyle of a Buddhist monk.

The Burmese Harp is not just a movie, it is life as it is, without embellishment, Kon Ichikawa perfectly revealed the harsh, sometimes funny, but most importantly, real reality.

The movie is very good for 1956, a special respect for the defiant cast, demonstrating a very believable relationship, without a drop of pretense.

It was the first movie in the genre of Drama, Music, War, after which I had a double impression: on the one hand, it was interesting to watch the characters, and on the other, some of the actors clearly lacked experience.

In this movie, the concepts of `good` and `evil` are well intertwined, 116 minutes fly by unnoticed, but after watching, there is a feeling of some kind of understatement.

I liked the director`s work, Kon Ichikawa conveyed the human essence well, it was funny to recognize my acquaintances in typed characters.

Without a good acting role, watching The Burmese Harp would have been simply unbearable, Jun Hamamura, Rentarô Mikuni, Taketoshi Naitô managed to convey the characters of the characters so naturalistically that it is almost impossible to tear yourself away from what is happening on the screen.