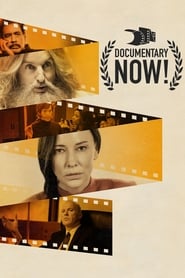 Loving parodies of some of the world’s best-known documentaries. Each episode is shot in a different style of documentary filmmaking, and honors some of the most important stories that didn’t actually happen.

The best series among Comedy not because it is a product of IFC, which produces only high-quality cinema, but because the creators really put their soul into Documentary Now! and it is impossible not to feel it.

Each episode for 23 minutes tells a small story from the lives of the heroes, as for me, the series uses a rather atypical manner of storytelling and disclosure of characters for Comedy.

Paradoxically, Documentary Now! did not become for me another, carbon-copy product from Broadway Video, on the contrary - the series is extremely life-affirming, every 23 minutes carries an entertaining and intelligible lesson.

The series conquered from the first episode and during the 3 my feelings for it did not cool down due to the fact that Bill Hader, Fred Armisen, Helen Mirren perform their roles so well that it feels like this is not a game, but their real life, which we are allowed to observe.

First of all, I really like the plot, it is very innovative and daring, especially when you consider the fact that the first season of the series was released in 2015, each episode is an explosion of emotion, placed in a 23 minutes episode.