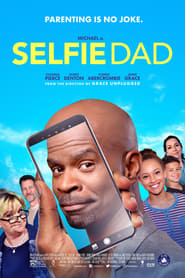 Spiraling into a mid-life crisis and feeling disconnected from his family, Ben Marcus, a reality-TV editor, thinks he can only be happy by fulfilling his dream of becoming a professional comedian. Ben posts his stand-up routines to YouTube, and the videos fall flat. Then his tweener son posts Ben miserably failing on a home improvement project, and much to his teenage daughter’s dismay, it goes viral, launching Ben’s social-media career as Selfie Dad. Although he quickly becomes an award-winning phenom, no amount of success brings Ben satisfaction. Through his friendship with a young coworker, Mickey, Ben finds the secret to a happy family . . . with his Bible in one hand, and his phone in the other.

I liked the movie Selfie Dad, thanks to the boring dialogue between the characters and the really intriguing moment of their interaction with each other, 1 minutes of time were well spent.

What I love about Comedy, Family is that absolutely any movie made in this genre always has such an important component as an unrealistically cool musical accompaniment.

Throughout the 1 minutes, I had the feeling that not today, but tomorrow, I will definitely meet them in the nearest supermarket or park.

Despite the dryish script in places, Brad J. Silverman created a good movie: the atmosphere is perfectly conveyed, everything in the frame looks natural, each actor is in his place.

The characters are interesting and not stereotyped, but the Chonda Pierce, Dahlia Waingort, Emily Tosta, James Denton, Johnny Pacar, Michael Jr., Pat Finn, Shelby Simmons, who brought them to life, pumped up a little, because they did not always play their roles reliably, apparently, they could not fully feel their heroes.