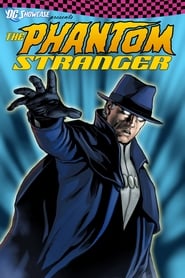 Set in the 1970s, the short follows young adult Jess as she joins her friends at a party in a dilapidated mansion hosted by the mysterious Seth. When odd things begin to happen to Jess and her friends, the Phantom Stranger intervenes to save her from a dreary fate.

I liked the movie DC Showcase: The Phantom Stranger, thanks to the boring dialogue between the characters and the really intriguing moment of their interaction with each other, 15 minutes of time were well spent.

After finishing watching this movie, I came to the conclusion that for the broadcasting of movies in the genre of Action, Animation, Fantasy, Horror, some storylines do not fit at all in the period of time that is allotted to them, and simply require some kind of continuation and development.

Bruce Timm set the movie at a frantic pace, all 15 minutes, from start to finish, the action does not let go, while it goes harmoniously, without sudden jumps and plot failures.

You fall in love with this movie from the first scene, Bruce Timm thought through everything to the smallest detail: a cool acting game and a plot, in which, in addition to drive, there is also depth, they catch to the depths of the soul.

The movie keeps tight grip on until the final credits, despite the fact that Grey DeLisle, Michael Rosenbaum, Natalie Lander, Peter Serafinowicz, Roger Craig Smith performed their roles rather weakly, probably Stanislavsky himself would have told them: `I don’t believe`.